You might have heard the word ‘API development’ over a hundred times while communicating with mobile app developers. In this article, we’ll cover everything you should know about this technological buzzword. So, buckle up and get ready to dive into the world of APIs.

What is an API?

API stands for “Application Programming Interface.” It is a set of standards, instructions, and requirements that enables a computer program to import or access data, features, and services of another program. In layman terms, APIs are a gateway for apps or software applications that allow them to communicate with each other.

Another example is the Google Maps API. It is very popular for the apps that require mapping and location services. Unlike Facebook, Twitter and LinkedIn’s social APIs, Google charges for its map API if the requesting application is paid, or exceeds 100k API queries within a 24 hours period.

Integration of APIs is crucial for the mobile app development process, as it abolishes the need for creating every app program from scratch. Instead of reinventing the wheel, the development teams can utilise existing apps or platforms that allow API integration. It boosts their mobile app’s time to market and reduce the cost of development.

API Key: The API key is an authentic code passed by the mobile app owner to the API requester. It is to recognize the receiver of the API.

Endpoint: The API communication happens between two software systems. One end of the channel is coined as Endpoint.

POST: It is an HTTP method to build resources using the REST ful API.

GET: GET is the HTTP method of obtaining resources from RESTful API.

OAuth: It is an open standard authorisation framework to access from the user’s side without sharing the credentials.

Latency: Latency is the time taken by an API from request to response.

Rate-limiting: It is the process of limiting the number of requests a user can make on the API.

API Throttling: The process of regulating API usages by the users is termed API throttling. So, when the user crosses its daily or weekly API request limit, the server alerts the user.

REST: Representational State Transfer or REST is a type of programming architectural implementation that enhances the communication efficiency between both the endpoints. As the name itself elaborates, the REST programming shares only references of the data instead of sharing the data itself. Systems built on this architecture are denoted with ‘RESTful’ systems. The most successful example of a RESTful system is the World Wide Web.

SOAP: Simple Object Access Protocol or SOAP is a protocol to share structured information on computer networks SOAP is a messaging protocol and works and XML information set for message format and application layer protocols for message negotiation and transmission.

Suppose that you are on a website to book a flight. The site asks you to fill up a form with details such as departure date, preferred time, domestic or international flight preferences etc. Right after you fill-up the form, you get the list of several flight options with details like pricing, seat availability, timings etc.. Ever wondered how it happens?

In this scenario, the airline’s website and flight booking app/platform are the endpoints and the communication between them happens through REST and SOAP. However, most of the mobile app development companies prefer using REST over SOAP as the SOAP APIs are very heavy to the platforms.

Generally, there are four types of APIs:

Commonly known as Public APIs, Open APIs are freely available for everyone with no or minimal restrictions. Access to these APIs may require registration, and API key, or OAuth or it can be completely open. Open APIs focus on providing external users with data and services.

Partner APIs are shared among strategic business partners. These APIs cannot be accessed by everyone, as specific entitlement is required to access them. Partner APIs are generally exposed to the public domains so that the developers can access them easily. However, the onboarding process will involve a specific validation workflow to authenticate the access.

Also called private APIs, these APIs are only exposed to the internal systems. Internal APIs are meant for consumption across different internal development teams of a company. These APIs are responsible for the movement of the company’s confidential data and are heavily governed. Generally, companies expose these APIs to the internal API developer portal, which authenticate and authorise the right users with the right set of APIs.

Composite APIs are the combination of multiple service APIs. These APIs are built using the orchestration capabilities of the API creation tool. It allows developers to request from multiple endpoints in a single call. Just like the example discussed above where the flight booking website needs data from several endpoints (airline websites) for a single task, the Composite APIs are a very good example of microservices architecture pattern.

How to Develop APIs?

Now the most important part, how do you develop an API? What are the tools and technologies you should use? And what are the best practices to develop APIs?

Restlet: An Integrated Development Environment (IDE) for API development where Java developers can develop their own REST architecture based web APIs (REST APIs). RESTlet API development framework is compatible with HTTP, HTTPS, JSON, and XML. It can be downloaded for free under an Apache license.

Swagger: An open-source API development framework which allows developers to create RESTful APIs. Swagger is a series of tools for API development. It starts with Swagger Editor, used to edit API specifications in YAML. Then Swagger UI that allows developers to dynamically generate documentation and sandbox for the API. Lastly, Swagger Core for implementation of Swagger in Java.

Apiary: It sounds more of a gimmick but Apiary promises tools that allow developers to build their APIs in 30 minutes. Apiary provides the developers with mock servers that allow them to run tests and mock-ups before encoding an API (like wireframing for user interfaces).

GitHub: An open-source git repository hosting service that allows developers to easily manage code files, control versions, pull requests, and comment, all of which will be distributed across the groups. Developers also can save their codes in private repositories.

API Science: A tool used to evaluate the performance of both external as well as internal APIs.

AuthO: An identity management system for authentication and authorization of APIs.

What Features Should Your APIs Incorporate?

Modification timestamps, also known as ‘search by criteria’, should be incorporated into every API. A good API will also allow developers to search data by its date. It is because after the initial data synchronization, the developers will typically be interested in the changes since the last synchronisation.

Therefore, while triggering to poll data from the API, the most important question is how to detect changes in the data? The APIs provide timestamps to every data field so that the API request can specify the last synchronization date as a point of reference and request data that has been loaded since the date.

It is natural that APIs will be transferring huge amounts of data even if the data is the changed data. Not all the data is required in one sitting for the API request, it can be only the first page or such. This is why Paging is required for APIs. A decent API should limit the amount of data it receives and frequency of requests in one go.

Paging can only work if the data is ordered. If the data isn’t ordered, it will become near to impossible to know whether the API has already received the data or not. Thus, the API should sort the data at least by the modification timestamps.

Your API should provide authorisation via OAuth. OAuth is an open standard framework for REST/APIs authorisation, providing better usability for the developer. It is faster than any other authorisation methods – i.e. a tap on the button will do the authorisation.

Accept and Respond with JSON

JSON is a data transferring standard and to developers, it will look very obvious to use JSON. But, to be clear, REST allows different output formats including plain text, CSV, RSS, JSON, XML, and even HTML. Of course, it will depend on each application, but for public-facing services JSON is the data format you would use for communication.

Use Nouns Instead of Verbs

The REST approach of API development is resource based. So, the developers will be working with the resources and their collections – i.e. a single book and a stack of books. HTTP methods (GET, PUT, PATCH, POST, DELETE etc.) define the action on such resources and only these inputs should be used to change the state of the resources. 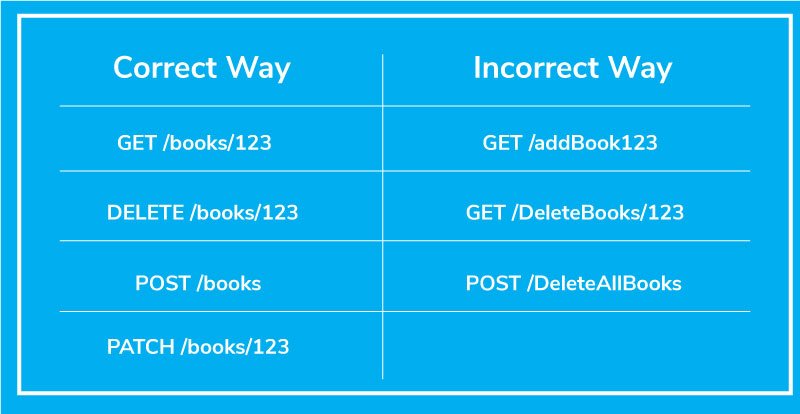 To backup API and safeguard it from ‘denial of service’ attacks and also redirect overflow of traffic, the API development process should utilise App Throttling.

Documentations are the bible for APIs that let other developers easily understand the whole process of integration. A good API documentation will reduce the API integration time and boost the API efficiency.

We hope the guide has been insightful and helped you understand what APIs are and how they work. APIs have been helpful in providing mobile developers to enhance the user experiences and backend capabilities. Gone are the days of unassociated and isolated apps. Nowadays, developers utilise backend APIs to create apps that are interconnected and communicate with each other.

[…] and personalized notification, you won’t need to build infrastructure from scratch. There are third-party APIs available in the EdTech ecosystem, which you can make use of to feature-load your learning app for […]

[…] the next big thing is understanding that the more extensively you use it, the more unsound Application Programming Interfaces (APIs) would prove to be. Indeed, APIs are required when you talk about the conversion of the app […]