How to create a Video Conferencing App: Explaining Features and Technologies

As a result of the Covid-19 pandemic, video conferencing and chatting software mobile apps have seen a tremendous surge in usage. In fact, video conferencing apps were downloaded over 62 million times in March 2020. This growth is majorly due to the increasing adoption of Video Conferencing App like Zoom, Google Meet, and Microsoft Teams by businesses who have started working remotely to limit the virus spread.

As a matter of fact, among all the video conferencing apps, Zoom was downloaded the most in February and March, and the numbers are still increasing within the EU, US, and UK regions. Not only corporates, but individuals also have increased the use of video conferencing apps. Social-distancing means that people have to bring their social life online.

Thus, to ensure uninterrupted conversations, many startups and companies have created video conferencing apps like WhatsApp and Viber, apps which generate millions in revenue. If you also want to build a video conferencing app, you need to understand the set of crucial features and the cost of development.

The key purpose of these apps is to provide a platform for the users to stream videos from the front or back camera of other users. Every app has their own target audience, and so do the video conferencing apps. The target audience for video conferencing apps include enterprises with frequent meeting requirements and general users that look for an easy way to stay in touch with their friends and family.

This article will outline the steps, features, and technologies that are required to build a video conferencing app.

How To Build A Video Conference App?

First thing first, throughout the time, we’ve seen that not all video conferencing feature development projects start from scratch. There are situations where an existing app needs to integrate video conferencing. For instance, telehealth apps require video chatting nowadays. There are software development companies that can help the app owners to integrate video chatting features.

The first step to build your video conferencing app is to design its User Interface and User Experience (UI/UX). Minimalistic designs are trending at currently, and if you are looking to target a wider audience with high diversity, it should be your choice. A UI containing specific limited features will appeal to a broad variety of users. If the UI has tons of buttons and menus, it is more likely that the users will get confused or annoyed.

Once the app functionalities are clear, the app prototype is ready to be made. The app backend can be built in several ways. You can use various SaaS (Software as a Service) solutions like Trova, PubNub, etc or you can build your app from scratch, which will allow more custom features to be included. Both approaches have their pros and cons. SaaS solutions will save you time while building from scratch will give you more flexibility.

Transmission of live video and audio data via an app is only possible due to the real-time communication protocol – WebRTC, WebSocket, etc. These protocols provide developers with features such as peering, audio/video codecs and streaming to establish communication among the users. In layman terms, these protocols establish data connectivity among devices that are willing to connect to each other.

When coding is complete, you would need to make sure that every line of your code works as it should. Bugs in the video conferencing software may lead to dysfunction of some features, audio/video desync, or even data leaks. This is why quality assurance before deployment is crucial. Of course, it is very difficult to launch an ideal software product. However over time, developers can improvise the functionalities as per the user feedback. Still, the first version should be as perfect as possible for your users. 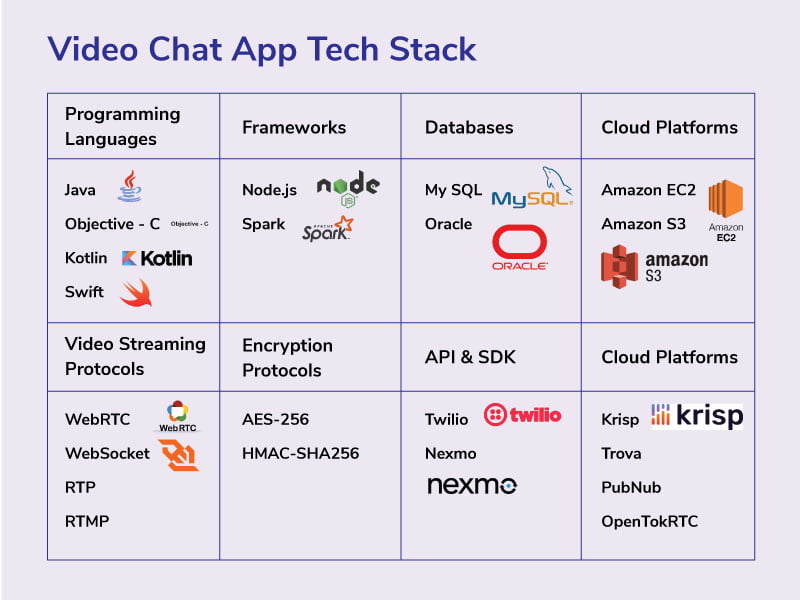 Note: The technology stack illustrated above is based on an assumed set of features. We recommend that you always discuss the required technologies with an experienced mobile app development company. You can get in touch with one of our best technical architects for your video conferencing app development. Click here to connect.

Every software development life cycle consists of several stages and most of the end user faced mobile apps go through the MVP stage in its initial stages of development. The MVP (Minimum Viable Product) of the mobile app includes a minimalistic set of features that help you identify the gaps and chance of improvement in the app idea. Here is the list of features you may want to include in your video conferencing app MVP:

It isn’t necessary for you to ask every user to sign up. For example, Zoom users can just invite people to join and the joinee doesn’t have to register. Still, the registration feature is crucial for users that frequently use the application. It is because repetitively requesting names and details can be irritating for the users.

Registered users are more likely to be more frequent users of the app, and they will get to use the personalisation benefits. However, to make the registration process hasslefree, you can use Google or Facebook logins so that the users don’t have to type in all of their details.

Once the users have registered in the app, they may want to update their personal details such as passwords, e-mail addresses, mobile phone numbers and profile picture. If your app has paid subscription plans, you will also have to help users manage their payment details.

It will look odd if you build a video conferencing app without a contact list. However, irrespective of how ordinary a contact list looks to you, building one comprises a couple of components. The first possibility is the search engine, and the rest includes integration with the user’s phonebook and Google contacts. We’ve experienced that the Google Contacts API is one of the easiest ways to import contacts.

The main ingredient of the video conferencing app. To be clear, only having the video calling facility will not suffice, there also has to be a voice calling feature. People don’t want to have multiple apps for very similar purposes. They would actually prefer using the app which does most of the job required.

Voice calling also becomes very useful when utilised for foreign calls. Cellular tariffs for international calls are high, but using voice calling over the internet will not only save money for users, but they will also provide better calling experience with high definition audio transfer.

For video calling, the app should support HD quality. However, the user’s internet bandwidth is not in your hands, but your app should be ready to provide high quality video calling features.

Person to person calls are good, but it isn’t enough to make your app loved by a variety of users. Your users are both individuals as well as businesses, which tend to conduct group conferences. One of the prime reasons why Zoom has been a success is that Zoom group calls support 1,000 people at a time.

To start with your app cannot have support for less than 50 users if you are targeting enterprises as your primary customer segment. Developing the group calling feature will include empowering hosts to invite, ban, mute and unmute attendees. However, the cost of developing your video conferencing app will increase as you increase the support for more users for group calling. It is because the more users that the conference has, the harder it becomes to build the logic for the app.

Text chatting is the feature that every user will require. Because many times, the users don’t have the option to make a call due to poor internet connectivity or simply because they are busy. Many video conferencing apps have utilised Twilio to equip their app with text chatting features.

Data security is one of the prime concerns all across the world. Governments are imposing compliances to ensure that their people’s data is secure. Mobile apps use end-to-end encryption for the cases where recipient and sender devices are the endpoints. In such encryption, the message is encrypted on the sender’s device and decrypted on the recipient’s device. Nobody can read the message in between.

There are protocols like HMAC-SHA256 and AES-256 that help mobile app developers make their video conferencing apps secure. These protocols encrypt the data by splitting it into 256 bits long blocks. Then the data is decrypted on the recipient device.

This is a very simple feature that literally eases out many of the common user problems. By enabling this feature, the users don’t have to think about opening the app frequently to check if they’ve received any new messages or missed any calls. Developers use third-party software tools such as Apple Push Notifications to ensure that this feature is implemented properly.

Basic features are good enough for the app to launch, but if you want your customers to love your app and choose it over your competitors, you need to have some advanced features. Here are some of the most popular advanced features of a video conferencing app:

A very practical feature for the video conferencing apps in modern times. It is common that during an office conference call, attendees do not want to share their background, because they may be sitting in their bedroom or in a non-suitable environment for a formal call. Therefore, to eliminate this inconvenience, your app can have virtual background features. The feature replaces the user’s background with a scene of their choice.

This technology is heavily used in Hollywood superhero movies. You might already know that they use green backgrounds to make the transition more effective. The case is the same for your app. The virtual background feature works best if the user has a plain green background.

Every video conferencing app that caters to corporations must have the screen sharing feature. This feature is very useful for business meetings, tutorials, game streaming, or even watching movies together. Hence not only businesses, but also the everyday casual user can leverage the screen sharing feature. Developers use WebRTC protocol to implement this feature into video conferencing apps.

These are the features that will make your app fun for the casual users. The custom mask feature was initially introduced by Snapchat, but it has gained much more popularity in recent times. Using the AR technology, you can build a system that allows users to create their own custom masks.

Similarly, the users will possibly get bored of using the standard emoji and stickers. Apps like Whatsapp are already providing their users with the ability to create their own stickers via third-party apps and then bring them to Whats App. You can do similar with your video conferencing app.

During the times of Covid-19 pandemic, where people have limited person to person meetings, video technology has come to the rescue by providing everyone with the ability to easily connect and see each other. Apps like Zoom, Skype, and Google Meet have made it possible for businesses to adopt a remote working culture.

If you want to sail into the stream of the increasing video conferencing app market, you are very welcome to chat with us via Whatsapp for more information.