The Internet plays a crucial role in our lives and there is no denying the fact that everyone is dependent on the internet. Even enterprises and markets use the Internet to engage more customers all over the globe. Being updated with the latest technologies and tech devices is another major factor to reach a large audience. With many new technologies introduced in the last few years, the Internet of Things (IoT) has completely revolutionized the face of technology.

“IOT IS A WORLDWIDE NETWORK OF DIFFERENT INTERCONNECTED OBJECTS BASED ON STANDARD COMMUNICATION PROTOCOLS.” 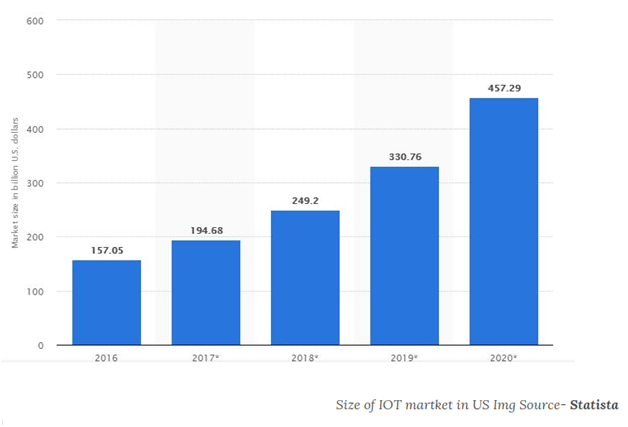 What is Internet of Things?

The Internet of things or IoT is a community of associated bodily gadgets that can be accessed through the internet. In less complicated phrases, it is a model of interrelated devices of many sorts like objects, computing devices, digital machines or even human beings with particular identifiers (UUIDs) who can transfer records over some community without using human-to-human or human-to-laptop interplay. IoT can be a vehicle with a few sorts of the sensor, a person with coronary heart monitor implanted, animal having biochip transponder or any other such component. Nowadays, agencies are making a massive usage of IoT to better understand their customer behavior and serve high-quality.

The above statement cannot be denied as IoT technology not only affects users, but the developers and service providers are also affected by IoT. It changes the way of software or web app development on many levels. The complex IoT network creates new challenges for the developer in both, front-end and back-end development.In this blog, we will study how IoT is affecting and helping in reshaping the web development.

IoT and Web Development Are Related to Each Other

Before beginning with how web development and IoT are connected, there is an important fact that you must know. The fact is that the network of all interconnected devices depends on the web servers. Data collected by the sensors is stored online in the cloud for remote access. The devices exchange information or communicate with each other using advanced messaging protocols. The user interface helps the users in communicating with the connecting devices for retrieving data.

Most of the IoT devices can also display web content like TV, wearable gadgets, and industrial monitors, etc. Some of them are also able to search web content through browsers, like Amazon’s virtual assistant Alexa. This makes clear that IoT is an important aspect of web development.

There is no doubt that everyone who owns a smartphone has experienced IoT at some point in their lives. In the coming years, it is possible that business enterprises will start integrating sensors with wireless technologies to take their business at new heights. On the other hand, customers will use IoT for a better and customized service experience. People will be able to track their health or they can also control their home appliances using sensors and analytics. Similarly, IoT can shape the future of web development efficiently. Still, there are many firms and industries which are not aware of IoT or which are not using IoT due to its expensive side. But with the continuous growth of IoT at a rapid pace, it is important for developers to learn more about this technology.

The integration of IoT with web development will make designing and development more complex, as the front-end interface will be used by users to communicate with devices that will be operated using IoT like sensors, cameras, and many other smart devices. Various websites will also require IoT for communicating with back end databases to store personalized data to retrieve it later whenever needed. Due to this, the page loads much faster with no delay in transmission timing in web development In upcoming years, technology will allow developers in using a powerful language to develop a dynamic front end interface with a robust back-end which will be helping users to communicate with IoT devices.

For a smooth and swift web development process, it is important for the business to have a team of expert and proficient developers. But this is not an easy task, and this is the main reason why some of the enterprises are not capable of integrating IoT as they got stuck in managing their development team. However, you can follow below-mentioned strategies to do the same.

Before scaling a web development team, it is important to regulate what kind of developers you need to begin a successful web development process. It will help the business to find the right developer from a pool of available talent and then you can adapt the right technology combined with coding expertise for developing a robust web application.

With the continuous emergence of competition in the market, it became important for the development team to stay updated with the latest technologies and trends. This will help the business to develop robust web applications with interactive UI. In addition to this, it will also significantly boost up the business.

With the rapid emergence of IoT in the market, many new opportunities for business enterprises have been evolved to develop a useful and innovative application to make human lives a lot easier. Although many development companies have already started integrating IoT in the application, as it is costly, many development firms still find it difficult to use with fragile devices.

To provide a seamless experience to users, organizations are upgrading the communication with IoT devices by removing major security flaws. This will also help developers to use various other web and technology tools rather than embedded C for web development with IoT. Below are some techniques that can be considered for developing web solutions integrated with IoT interactions.

IoT devices are battery powered and wireless instruments, so it is important to a fully-fledged power management system. As all the huge programs that are running in the backend drain the battery very fast, user communication with the IoT devices decreases.

One of the major drawbacks of IoT integrated solutions is that they are not much secured. Sometimes it is easy for a hacker to crack web-connected patterns. So developers must use strict and secured design practices. After all, this is the responsibility of the developer to secure IoT apps with high security.

An IoT application must have an interactive, smooth, and intuitive layout. The developer must use the latest web designs for web development that are meaningful and supports rational workflow. It must be kept in mind that the IoT designs should also be compatible with mobiles for the user’s benefit.

Smooth and clear conversation between the user and IoT devices is the most important aspect. So it is important to create a robust back-end that can seamlessly transmit and receive data. Each device has various qualities, commands, and data for operating according to the user’s inclinations.

Industries Which Benefitted from IoT

Apps are for various services like there is a healthcare app to monitor your health and exercise or a retail app for online shopping. Similarly, there are various other apps for various other services. Developers are planning to integrate IoT in each sector to provide better and useful services to users. Below mentioned industries are most impacted by IoT.

With IoT enabled devices, users are now able to track their health daily on their own. In addition to this, IoT integrated apps engage all aspects, from personal healthcare to healthcare institution facilities, to online health checkups and making an appointment with the doctor.

Considering all the above-discussed facts, it is clear that the Internet of Things (IoT) is a real game-changer in the field of web development. With the arrival of IoT, the lives of humans became convenient and easy. If you are also planning to integrate IoT with your business to provide its benefits to users, then get in touch with us for robust app development.

[…] team of developers and web experts. We are offering best-quality services and solutions for Magento ecommerce development in USA and so on. Having more than 7+ of business experience with a large number of ecommerce projects […]