How FinTech Apps Are Changing The Banking Industry?

The banking landscape has become more fragmented and competitive in the last 10 years. Thanks to financial technology advances, and regulatory changes since the 2008 financial crisis, the banking industry has evolved at a rapid pace. The technology advancements that some financial services have made, has resulted in some other banks being left behind. This is in part due to their legacy infrastructures. But another factor was the slow speed of which traditional financial companies reacted to these technology advancements. The slow reaction from traditional banking firms, have created great opportunities for FinTech startups since 2010. This has led to the question today of How FinTech Apps Are Changing Banking Industry?

FinTech has reduced the stranglehold that traditional financial services providers have on the financial industry. The regulation that came in post-2008 financial crisis brought in new entrants to the banking industry. However, it was not until the development of FinTech development, where new entrants started to feel like there were competing with traditional service providers on a level playing field. Pioneering entrepreneurs such as Anne Boden and Tom Blomfield seized upon this market opportunity to create great companies. But what exactly is FinTech? And how can we expect it to change the future of banking as we know it?

What is FinTech (Financial Technology)?


FinTech (or financial technology in its full name), is used to describe technology that manages and delivers financial information. Consumers, enterprises and financial institutions often use fintechs to optimize their financial processes. Both financial services and non-financial companies are able to use FinTech Apps for optimizing the financial aspects of their business. This can be achieved via new software, new processes, or a totally new business model.

FinTech Apps are not new. It’s been around since the commercial use of computers. After the global financial crisis of 2008, however, FinTech Apps  has evolved to disrupt and reshape the following services:

The Appeal of FinTech Apps to Companies

Financial Technology has greatly changed the way that banks and financial institutions operate today.  The rapid rise of FinTech Apps in recent years has increased the expectations from consumers and businesses, as they now demand more responsive solutions. The number of businesses that have implemented FinTech apps into their business operations has sharply increased in the last 10 years. This has led to an efficiency increase within a variety of company types, ranging from creative agencies to insurance companies. In the past five years alone, investment in private FinTech App Development Companies has jumped from $2.1bn in 2011 to 19bn in 2015. Part of these rises is due to the ‘new kids on the block’, presenting younger consumers with new and innovative ways of banking. 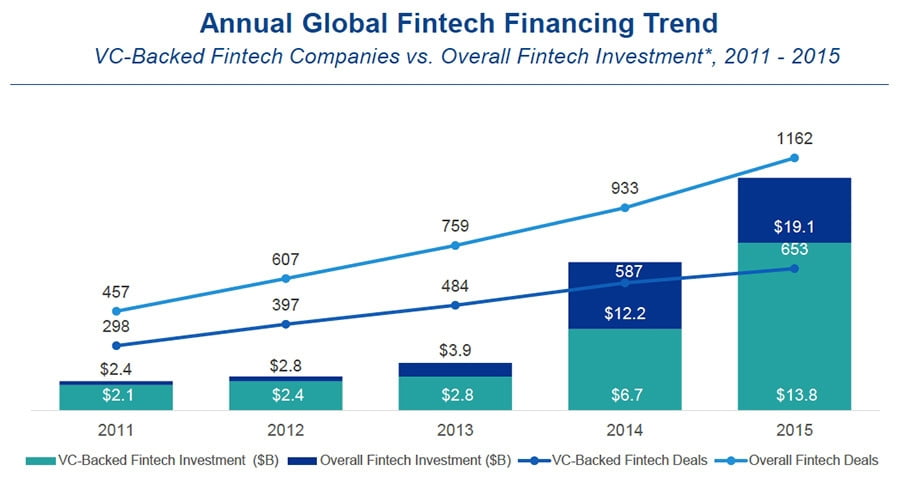 The trend of younger audiences moving to choose the modern FinTech app development companies has caused the banks to increase their investment into FinTech. Investment has resulted in further standardization of back-office functions, and a redesign of some company’s service distribution channels. This is, in particular, true for bank’s with business-to-consumers models. Some members of the financial services industry see the boom in FinTech as a threat to the traditional banking industry. Other members of the industry believe that FinTech is a challenge that can be turned into an opportunity. This is due to FinTech apps providing more flexibility, better functionality in some areas, and the aggregation of services that it enables. Some banks have been relatively quick to adopt these new technologies, and upgrade the services that they provide to their clients.

Thanks to technology, people’s expectations of their financial service providers have been raised. People are expecting a service that is fast, streamlined and convenient. Furthermore, customers often expect providers to offer a full-suite of services for their ease. However, due to the cost associated with offering a range of services, this is something that traditional banks can struggle to meet. This has allowed FinTech apps to make strides in the following areas:

The evolution of modern FinTech had a major impact on traditional banks. Faced with huge new competition, banks have been forced to adapt and keep up with the market. It is expected that traditional banking firms will need to reduce jobs by at least 30%, in response to the threat posed by FinTech app development firms. This is due to users switching from traditional banks to FinTech Services. As a whole though, banks remain trusted institutions. FinTech apps presence will themselves however create a vast amount of new jobs. Many banks have responded to the market challenge by developing their own tech services. This includes apps that allow users to send/receive money instantly to and from their clients, online loan calculators and spending analysis. In the process of providing these offerings, some traditional banks are even investing and collaborating with FinTech App Development Companies.


FinTech allows customers to have 24/7 access to their banking information. FinTech also enables services to be made available via the latest digital channels such as social media. .By the end of 2020, it is estimated that social media will become the primary medium to connect, engage, inform and understand customers. It is expected that when customers carry out research to compare different banks’ offerings, social media will be one of their main research channels.

AimBrain is a mobile biometrics platforms. This firm wants to do away with passwords by tracing the way the user swipes and taps their smartphone screen to identify them.

Founded in 2011, the bitcoin wallet now has 21 million users with its market capital at roughly $150bn at the time of writing.

The German smartphone-first mobile bank has drawn 80,000 users within its first year of launch. Number 26 is going against the grain, by forming strategic partnerships with other FinTechs, much to its success.

Property Partner is a platform that allows users to invest in individual properties across Europe. Investors are able to use the platform to make investments with as much or as little money as the investor desires. As of March 2016, the business had crowdfunded over 170 properties, with more than £25m invested in just over 12 months.

Revolut’s vision is to make travel money a thing of the past. They are doing well in their progress of this goal, as their customers are using Revolut cards all over the world instead of cash. The accompanying app boasts a range of useful features, including an option to block the Revolut card directly from the app in case of theft.

FinTech apps advances have become more and more widespread. It is estimated that 3 out of 10 clients (both personal and commercial) use FinTech, whether it is knowingly or unknowingly. FinTech apps have continued to shape and build the future of the financial services industry. It is now a mandate for traditional institutions to plan and invest in emerging technologies. If traditional industries want to succeed in this evolving field, they need to provide solutions that are beneficial for either/or the financial sector, and the end-users.

Innovative Financial Technology has changed the finance industry for the better. FinTech apps has brought a lot of new players to the industry in the last 10 years. We believe that the FinTech App Development Companies who fulfill the biggest needs of customers digitally, are the ones that will succeed in the long-term.